Hidden camera installed by the family of the young Elisha Hospital revealed the alleged violence that lasted six months and included punching and pulling hair. The arrest of four suspects extended

Haifa Magistrate's Court extended afternoon ( Friday ) in four days the arrest of four men working in the hospital Elisha , suspects that the abused young woman of 23 hospitalized for four years at a medical institution in a plant. Documentation hidden camera installed by the family at the hospital , which was published today may shed light on the alleged acts of four, who were arrested yesterday. Gag order issued details of the suspects.
No comments:

The recently drafted report, compiled by the Committee on the Rights of the Child, notes that while Israel has passed a number of laws addressing children's rights, it does not see to it that the laws are efficiently implemented.

The report also criticizes Israel for maintaining that the UN convention on the Rights of the Child does not apply in the West Bank.

The UN General Assembly approved the UN Convention on the Rights of the Child on November 20, 1989, after a decade of deliberations. Yesterday, the anniversary of the vote, marks International Children's Day.

The Convention was ratified by 200 countries, including Israel, in 1991.

UNICEF established the Committee on the Rights of the Child to report every few years on the implementation of the Convention in various countries.

The report on Israel was prepared a few weeks ago in UNICEF's headquarters in Geneva, and is based on Israel's responses to an official questionnaire.

In the section noting that Israel does not have a national plan of action for children, the report points out that the Palestinian Authority is now formulating such a plan, taking the UN Convention into account.

The report notes that contrary to many other countries, Israel does not have a government-appointed commission to protect and promote children's rights.

The Convention is not part of Israeli law, the report says, but the courts, including the Supreme Court, base rulings on it, though Israel is not adamant about implementing laws protecting children.

The report notes that official bodies in Israel do not collect comprehensive data on the status of children or monitor children, and Israel does not publish annual figures on government spending earmarked for children.

"Next year will mark two decades since Israel ratified the Convention on the Rights of the Child, but in recent years the situation of children has gone downhill by any parameters," Israel UNICEF Chairman Moriel Matalon said. "Concern for children is not at the top of government priorities in Israel."

Moriel pointed out that issues pertaining to children are scattered among different government offices with no guiding hand. "A government commission must be established with legal powers so it can work vis-a-vis ministries and local authorities and intervene in any case where children are being harmed," Matalon said.

Deputy Prime Minister Silvan Shalom said Thursday that the schoolchildren's rights law he initiated a decade ago has lost impetus. Speaking at a meeting of the Citizen's Empowerment Center in Israel and Tel Aviv University's School of Education, Shalom said "Principals don't know they have to post a copy of the law in the school or teach about it during the first week of school. It's convenient for the system to ignore the law because schoolchildren don't know how to make their voices heard."

Jyothi Kanics of UNICEF Geneva, who was also at Thursday's meeting in Tel Aviv, told Haaretz that contrary to popular wisdom, statistics show that promoting children's rights does not make it more difficult for schools to deal with discipline problems. In fact, the dialogue and the ability to listen to different opinions that develops based on schoolchildren's rights, can reduce violence, Kanics said.
No comments:

Protest in front of the Israeli Welfare Minister Meir Cohen 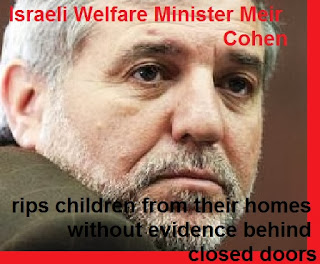 Meir Cohen rips children from their homes without evidence behind closed doors.
Protesters shouted to the Minister of Social Affairs Meir Cohen: "You are not  Welfare Minister
you are torture Minister" , "Ministry of torture not Ministry
Social Affairs " ...
No comments: